I can’t remember the occasion but at some point there was a conversation with my mom where I was telling her that I was too excited to sleep, in anticipation for something the next day. She told me that a similar thing happened to her sometimes and that she vividly remembered it happening when she was growing up, specifically the night before a class trip. She was anxious that she would fall asleep and not wake up in time, and miss the trip. After that, we explicitly refer to the inability to fall asleep for fear of oversleeping and missing something as ‘Class Trip Syndrome’ or CTS for short.

The last time I remember having a bout of CTS was a year ago yesterday.

I was trying to relax in preparation for my panniculectomy the next morning. I was not allowed to eat or drink anything past midnight, so naturally I was starving with a mouth as dry as the desert at 12:01. I had to check in at the hospital at 6am – I set my alarm for 4:45, so I could shower since I wasn’t sure how many of the following days I wouldn’t be able to. When I finally was able to settle down and decided on the couch for sleep, it was going to be more like a nap and I think it was after 1 am.

Right through my alarm.

I freaked out, I froze. I ran into the bedroom like a maniac startling Steve awake.

“We have to go! I didn’t shower! They’re going to cancel my surgery!”

Fastest and least relaxing shower of my life. I cut myself shaving, because you obviously have to shave your legs at 5:30 in the morning when you’re already running late.

Groggily putting deodorant on while I’m conditioning my hair Steve says “Why are we rushing if they’re cancelling your surgery? Why are they cancelling it?”

As if he has asked a thousand questions in the eleven minutes he’s been awake I shout “I have to be there in half an hour, they will cancel if I’m not checked in on time! My insurance approval is only good for today!”

I slip and slide my way into the bedroom where I put on a pair of lacy granny panties from Target for what I dream will be the last time, followed by a baggy tank top and loose shorts that I live in over the next eight weeks, alternating with the same top in white and the same shorts in pink.

I’m so excited and nervous that I can’t leave the house until I make sure I’m not going to crap my pants.

We are barely on the road and see brake lights. I’m almost in tears.

“I can’t believe I slept through my alarm, I barely even slept. Stupid Class Trip Syndrome”

He assures me that they’re not going to cancel my surgery “If anything,” he says “You’ll just have to wait until later in the day”

Comforting, yet not. “I can’t wait, I haven’t eaten since yesterday and I am soooooo thirsty”

When we finally pull into the hospital parking garage it’s about 6:20; I am relieved but still anxious, now because someone is about to draw on me, knock me out and make an incision in my body that practically cuts me in half. While I am cut open? Another doctor is going to root around in there and repair a hernia. You see why I might be crapping my pants, right?

We get to surgical check-in and wait in line, they’re backed up! HA! When it’s my turn to fill out paperwork, it’s actually the time my surgery was scheduled for. “Don’t worry,” the woman says, “we’ve been behind since before 6.”

Followed by another wave of anxiety.

We walk down three hundred hallways and into a large room full of beds where I will be prepped.

Multiple people come and introduce themselves to me, check my vitals, prick my fingers, inject heparin, ask me a ton of questions and stroke my ego by telling me how funny I am and how they never would have guessed I had weight loss surgery, that my face shape recovered well from the loss.

I’m the star of the damn show.

Six months prior I would have said the most humbling moment in my life had been when I had to stand in front of this attractive, and probably younger than me man I had just met in my bra and underwear discussing my floppy belly and letting him photograph it. On this day I would have said it was this; this moment in which I had to stand, NAKED in front of my boyfriend and this man who was still basically a stranger and let him push and pull and lift and adjust my skin and fat, all while drawing on it in that purple marker.

“Can I have a picture of what you cut off?”

“Yea, I do! I never got a picture of my removed stomach, or my gallstones ….” I trail off the way that you do as those drugs kick in.

I swear he rolled his eyes as he said “Sure, you can have a picture” but weeks later when he gives me the picture he says he didn’t. He’s probably right.

My last words in the operating room before they put me out are to a nurse “Please make sure he gets me that picture, you can text it to me” She agrees, probably to keep things moving, and I began slowly reciting my phone number.

Next thing I know I am being wheeled through the doors of the recovery floor saying hello to everyone. I’m happy. I’m alert. I’m starving.

I order food and Steve and I talk on and off, I pick at my food – I am in great shape.

My doctor stops by to check on me, to show us a picture of the removed fat and skin, which weighed just about SEVEN pounds. He says I did great.

Everyone who checks on me is impressed with my energy, I get to see a little of my incision, the nurse tells Steve to take a picture with my phone so I can see and I cry a little and then tell everyone I meet for the rest of the day that I saw my vagina.

I have a brief dizzy spell on my way back from a loosely escorted trip to the bathroom and pass out before Steve even got back home. My binder is opened three to four more times, nurses check on me, doctors check on me, students study me.

I recover. I eat eighty seven ice pops, watch some Friends and go home at noon the next day.

So glad I didn’t sleep later and miss the whole trip! 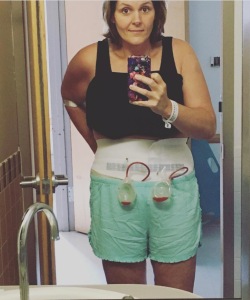